The Cowboys are the Kardashians of the NFL

The Dallas Cowboys have slowly become more of a circus in the NFL than a team with a winning tradition. It seems when the Cowboys are mentioned on TV, it is because of some off the wall statement by Jerry Jones or from something not football related. Jerry Jones recently said the Cowboys are part of “the highest rated show on TV”. Um, Jerry, I didn’t think the NFL was a show, I thought it was a sport.

To read the rest, please continue to Kody’s Sports Korner.

On Tuesday a story “broke” regarding an interview Jerry Jones did where he said that although he considers Dallas Cowboys wide receiver Dez Bryant to be an established player, he said Bryant still needs to “keep his guard up”. Here’s the article…

Here are some of the key guidelines that were set for Dez Bryant back before the 2012 season started:

END_OF_DOCUMENT_TOKEN_TO_BE_REPLACED

SBM Exclusive: The Worst Teams Of All Time

Here’s another feature from Sports Blog Movement. One of the things we love to do in sports is celebrate success, but in order to truly appreciate greatness, we must look at the other side of the coin.  This series, aptly enough called the Worst Teams of All Time, is dedicated to some of the worst teams in the history of sports.  Some were just truly bad, and some became bad at the wrong time.  Either way, all of them exemplify the opposite of greatness. Some had laughable regular seasons, and some had strong ones, only to die in the post-season. In any event, sit back and enjoy a good laugh or a good cry and celebrate the teams that were woeful so you can better appreciate the teams that weren’t.

Part 41: The Michigan Wolverines in the 1985 NCAA Tournament

Are the Browns Better Off Than The Cowboys?

This seems like a silly question to ask since the Dallas Cowboys have been winning at least 8 games and seem to be keeping most of their front office and coaching staff intact. But think about it this way, the ownership in Cleveland is trying to find the winning combination and is passionate enough to try find that, even if it means changing coaches and general managers as often as some people cycle out underwear.

The Browns could easily be one or two solid moves away from hitting a winning combination, but at the same time, you could almost say that about the Cowboys. But in reality, the Cowboys have probably made one or two moves to keep themselves from falling into the abyss. The Cowboys almost feel like a team who is on the brink of getting worse, than getting better. Some of that probably has to do with all the salary cap trouble they are in.

Jerry Jones came out during his time at the Combine and told a local beat reporter “He doesn’t see Jason Garrett going anywhere after this season”. Which should not be surprising to most fans because Garrett is the one hand picked coach Jerry wanted when he fired Wade Phillips. I think it is pretty common knowledge, Jerry wanted to hire Jason then, but went with a more experienced coach, so he didn’t get blasted by the fans and media for hiring a rookie head coach.

At least in Jerry’s mind, a few seasons under Wade gave Jason just what he needed to take over when the time was right. And in the early going it looked brilliant, but after three consecutive 8-8 seasons, fans are starting to sour on the Jason Garrett era. The 29-27 career record at Dallas doesn’t help either, because the fans are expecting a winning team sooner rather than later…

To read the rest, please continue to Kody’s Sports Korner

Should The Cowboys Keep Demarcus Ware?

There has been a lot of speculation this off season about what the Dallas Cowboys are going to do with defensive end Demarcus Ware. He is currently coming off a season where he spent some time with injuries and is valued to be around a $16 million salary cap hit this season. While he was signed to a deserving contract when he got it, it has shown the fact Jerry Jones tries to keep players by paying them when they are near the end of their use to the Cowboys.

While Ware may still have a lot left in the tank and could be a good player, everybody has seen that time is taking its toll on him because he is getting up in age and will probably have more years like this year, than years where he leads the league in many statistical categories. It has been said the Cowboys plan to get with Demarcus Ware and see if he will be willing to restructure his deal where he will be a smaller salary cap hit this year and going forward for the remainder of his deal…

To read the rest, please continue to Kody’s Sports Korner

What We Learned From Week 15 of the 2013 NFL Season: Truth or Lie Edition, Part III

As we have been doing all season, we are breaking down things that you need to know as we head into the play-offs. As we get closer, that means that issues with team get more magnified. That also means that a lot of assumptions that have been held about the teams who are still play-off contenders become true or get exposed as just another pack of lies. So, without any further adieu, here are this week’s questions…

1) Truth or Lie: The Philadelphia Eagles Defense is a joke.

They allowed 29 First downs and almost 50 points against a Minnesota Vikings team with no Adrian Peterson and they made Matt Cassel look like the second coming of Fran Tarkenton. As brilliant as Nick Foles and the offense have been, the defense has been the exact inverse.

END_OF_DOCUMENT_TOKEN_TO_BE_REPLACED

Up until now, we’ve been consulting our medical expert Dr. Kelly Brackett for his prognoses on NFL teams. But now that we are clearly in the homestretch, it’s time to shift our focus from the survivors and the casualties to an analysis of the survival of the fittest. That means we change our expert as well; rather than looking for overall health, this becomes an exercise in actuarials…or to make it sound less insurance-like..it’s time to look at the odds of each possible contender making the play-offs.  For that, we have invited legendary movie odds-maker Sam “Ace” Rothstein for his thoughts. 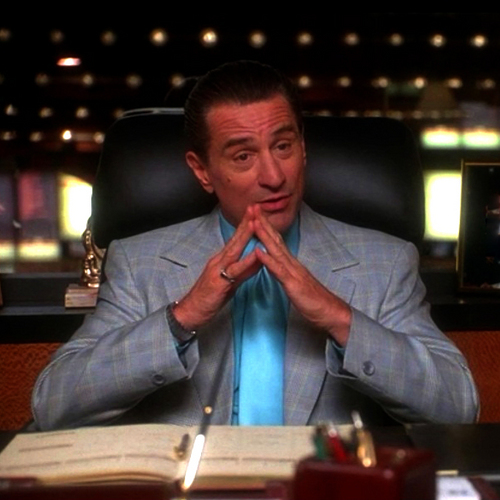 Metaphysical certainty. Steal as much money as you can get your hands on, then bet twice that much that Indianapolis will be in the play-offs.

With six games to go, the Colts have a three-game lead in the AFC South over their closest competitor, and they just beat them on the road with a dramatic comeback victory.The Colts will make the playoffs because no one else in the AFC South will step up and challenge them.  The Titans are in second place, and the other two teams might as well be Terri Schiavo two days after they yanked her feeding tube.  They’ve already beaten Seattle, San Francisco, and the Broncos, and by the time they get to the Kansas City Chiefs, both teams could be just resting up for January.

END_OF_DOCUMENT_TOKEN_TO_BE_REPLACED

What We Learned From Week 9 of the 2013 NFL Season

As we usually say, another week has passed in the sportsgasm that is the NFL season, but this week is a bit different, because J-Dub walked out of SBM World Headquarters after Richie Incognito called him some sort of terrible name. On a serious note, be sure to check out Meehan’s coverage of that story…

Now, let’s get to the important points from Week 9.

Because football straddles it regular season and it’s play-off season across the New Yea’s holiday, the Ravens started 2013 as an elite team.  They sure as fuck aren’t elite now, and they don’t deserve to be thought of in that light at all.  The Ravens are getting juked out of their shoes on almost every single goddamn play and there’s no way an honest eye can look at them as being a playoff team in the AFC.  They probably couldn’t even beat an NFC East team, which really just makes them the top-shelf, Wal-Mart version of the San Diego Chargers. Speaking of which…

END_OF_DOCUMENT_TOKEN_TO_BE_REPLACED

Dallas Cowboys wide receiver Dez Bryant has been the center of attention because of his antics on the sideline of Sunday’s last minute loss to the Lions.  This was a game that I understood there was going a certain level of frustration for a lot of the Cowboys players.  But Dez made a scene of it, and now it’s front page news.

What Dez Bryant seems to have forgotten is the Cowboys aren’t exactly strangers to blowing games like this one.  Perhaps the reason everyone else on the sideline was so calm is that they know damn well they should be 6-2 and running away with the division now known as the NFC Least.  END_OF_DOCUMENT_TOKEN_TO_BE_REPLACED