I must confess, my picks were awful last week. I’m so glad I’m not a professional gambler. If I was, I would have suffered a similar fate to Joe Pesci’s character in the movie Casino. Beaten with a shovel in a secluded cornfield, then buried alive. That’s how bad my picks were last week. Maybe, with the real referees back this week, my luck will change. I doubt it though. So for your comedic pleasure, my picks for this week.

The Falcons have looked like one of the best teams in the NFL early on. With a record of 3-0, Atlanta has been sharp in every aspect of the game. Matt Ryan is looking like an early MVP candidate, while the defence has been much better than expected. The Panthers are coming a humiliating loss to the New York Giants, in which Cam Newton was questioned for…

My Mind on Sports 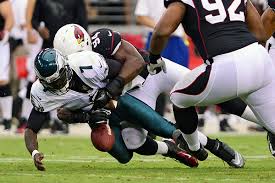 The Eagles went to the desert in Week Three and got blasted 27-6 by the Arizona Cardinals. Meanwhile, the New York Giants dominated the Carolina Panthers in Charlotte 36-7. Needless to say, the Giants are confident heading into this NFC East battle versus the Eagles in Philly. But who will come out victorious?

Quarterback Eli Manning and crew did any and everything they wanted against the Panthers. Well this week, the competition will be a little bit tougher. In order for the Giants to come out and continue their offensive roll, they must continue to get production from the running game. Running backs Andre Brown and Ahmad Bradshaw have been chewing up the yardage on the ground this year. They challenge for the Eagles will be to stop the Giants running the ball. And that task will be spearheaded by middle linebacker Demeco Ryans. If the veteran linebacker, along with the…

Do you remember Jon Lovitz’ “Pathological Liar” character from Saturday Night Live a few too many years back? That’s exactly how this incredibly self-serving and bullshit-laden apology from NFL Commissioner Roger “Kommissar” Goodell reads.  Check it out for yourself…

The National Football League is at its best when the focus is on the players and the action on the field, not on labor negotiations.

Just so you know, that is the only non-crap line in this whole message from the Kommissar.

All of us who love the sport appreciate the skills and dedication of the players and coaches. That is why we are focused not just on what happens on the field but what our game will be like in another decade or two. The NFL has always tried to look ahead, to innovate, and to constantly improve in all we do.

So, it seems that our long national nightmare is over. No, it’s not anything important like the war in Afghanistan (forgot about that, didn’t ya?).  Today, America is rejoicing over the fact that we are getting back the shitty union NFL referees to replace the ever-shittier replacement referees.

We all saw what a sham this turned out to be.  Some of us were pointing this out after Week 1.  But it took a debacle to happen on national television robbing one of the most popular teams in the league to get any action to resolve this mess.  Some of us predicted that a month before the season started…and we knew exactly why as well.

It should a huge indicator what a flaming asshole Roger Goodell is when I (who happens to be exceptionally anti-union)  have some empathy for the referees.  Just look at how the NFL put a strong-arm…

OK,  by now have seen what happened on Monday night. ESPN has “Zapruder Film“-ed this thing to death, and we are left with two conclusions. There’s those who saw the Packers get flat-out robbed, and there’s those who want Kommissar Goodell and his “Warren Commission” who would like you to believe the replacement referees didn’t egregiously blow that call.

There’s two problems with that latter theory. First of all, it completely ignores at three rules of the NFL.  Secondly, it lends itself to a set of ridiculous conspiracy theories, the leading one being advanced by those who hate the Green Bay Packers which is some sort of contrivance stating the NFL wanted the Packers to lose that game in order to make them victims, so the NFL could a) use that game to get out of this replace referee fiasco and b) use that victim status to help…

For purposes of full disclosure, I have far too many people in my life who call themselves New England Patriot fans.  After Sunday night’s loss to the Baltimore Ravens, I have found myself besieged with their caterwauling about bad officials, Joe Flacco, and every other reason they can think of to distract themselves from the fact they lost yet another big game.

1) The Patriots Are Another Team With Shitty Fans

Now, because the Patriots haven’t sucked for decade now, the ranks of their fans have swelled to include the fairweather butt-loafs that populate not only Boston and the greater Northeast, but includes generally obnoxious front-runners from everywhere else. You know the guy I’m talking about; the guy who wears a Tom Brady jersey (which always seems to come off in sub-freezing temperatures) despite the fact he weighs as much as a small car, who thinks “FAAAAAAAAAAAAACKYOU! YOUSUUUUUUUUUUCKKKKK! is witty…

It’s a crazy time of year for sports fans. Football is in full swing in both Canada and the USA. Baseball is in the stretch drive. Soccer is well underway, with the European Leagues nicely underway. The NHL was supposed to be in training camp mode now, but a nasty lockout has changed that. So there is plenty to talk about. And with all that changes are in order. So once again, with a tip of the hat to Bill Maher, it is time for NEW RULES!

Week 3 is upon us, and while it is difficult to gauge all 32 teams in terms of where they will end up at the end of the season, some trends are forming throughout the league. Yes it is early, but the pressure is on for some teams to turn it around, or face the wrath of a long, harsh season. With that said here are my picks for this week’s games. (I’m 0-1 so far this week, foolishly picking the Panthers to win on Thursday night.)

The Bears dressing room has the feel of Days Of Our Lives at this moment. Quarterback Jay Cutler has been the centre of the soap opera, with his drama queen antics. Whether crying on the sidelines, or chewing out teammates, Cutler hasn’t endeared himself in the Windy City. The Rams have looked decent so far and look like they…

It’s time for a great exercise in the hypocrisy that is political correctness. In terms of the treatment of homosexuals, the pendulum of social acceptance has taken a great swing. Thirty years ago, being intolerant of homosexuals was perfectly acceptable, and while idiocy will never be completely eradicated, tolerance has now become the norm rather than the exception.

However, one of the great way to get that pendulum to swing back is to abuse that tolerance. The case of Jamie Kuntz offers a perfect example.  Kunts was a college football player who claims he was dismissed from the team for being gay.

There’s a formula for creating victimhood where there is none, and Kuntz is using it to a tee.

1) The False Assumption: Kuntz Was Dismissed Because of His Sexuality

Even the original story has a hard time supporting that claim, largely because later on Kuntz himself admits to…

A couple of 2-0 teams square off at Jack Murphy Stadium on Sunday. The Atlanta Falcons and San Diego Chargers will determine to see which team starts off 3-0 in the 2012 season. These two teams don’t face each other that often, as this is the only the 8th time these two have faced each other. The Falcons have history on their side, winning 7 of those 8 encounters, including a 22-16 decision over San Diego back in 2008.

When The Falcons Have The Ball:

Falcons quarterback Matt Ryan is off to a superb start in 2012. The fifth year Boston College grad has completed 70.1% of his passes for 518 yards, 5 touchdowns and no interceptions in his first two games. Matty Ice has look composed and controlled in the pocket, making excellent reads and smart decisions when throwing the football. Ryan hasn’t won a playoff game as of…